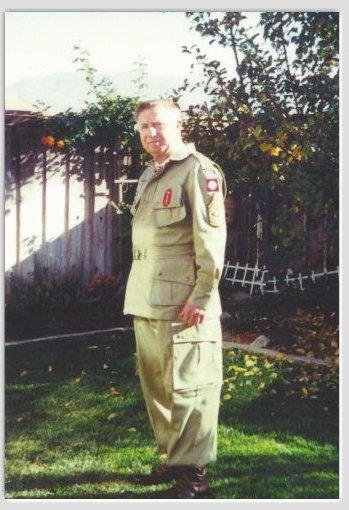 I joined the National Guard, 34th division in 1938. I wanted to go to the Army camp in Minnesota with my friends for two weeks. At 17 years of age, I needed my parents to sign. My Mom was okay with it, but Dad said, “No.” I only needed one, so off I went.

Then, at the time of the Japanese attack on Pearl Harbor, I was already in the National Guard on deployment in Louisiana at Camp Clyburn with a 3 day pass in Beaumont, TX.

Sitting in a friend’s living room, we heard the news over the radio. There was a gal in his lap. As he stood up, the girl hit the floor. He said “We are at war. Let’s get back to the camp."

I trained in 1940 at Clamp Clyburn, Louisiana where I had basic training firing the 155 howitzer (5-ton gun). I learned it quickly and became a trainer myself. I had one trip home over the year. Once the training finished, the Army didn't tell us where we were going. They never tell you anything until you are put on a train or bus and not always even then...

I also worked in the Test Battery (a new Airborne concept in Artillery) as an instructor in Massachusetts during January and February. They needed to know how much they could drop and keep together. They had a howitzer that broke down into ten pieces, a 75 mm Pack howitzer made in the Rock Island arsenal.

I crossed the Atlantic in the Matson liner, S.S. Monterey in March or April (10 days), with the USS Texas with us for protection. We went to North Africa.

When daylight came, we direct fired on the German site, making a two-mile hole in the German line. Clark & Ridgway (England) both wanted 456th support, so the battalion was split, half to England and half to stay with Clark in Italy -- C & D and half of HQ went to England. All the equipment was supposed to go.

Under direct orders, A & B acquired C battery’s equipment, including their guns. A & B had 6 guns each. I remember firing thousands of rounds in 24-hours over a three-day period with no sleep.

A side note: The guns got hot and when the barrel got red, you needed to change it. If it got white, the whole thing blew up.

Our group was the first troops into Rome. After Rome, Batteries C & D were re-constituted.

The operation Anvil-Dragoon in Southern France in August 1944

We made a night jump into Le Muy, Southern France. "A" battery hit the drop zone with half of HQ. The jump was very high because of the mountains. A lot of the battalion ended up at Cortez.

We took the town of Le Muy, removing a road block and allowing the 1st Division, an Oklahoma National Guard unit, to come through.

Later, at Mourmelon, Sgt Hambright (known as “Hambone”) hooked up the radio. The 99th is one-half wiped out and the division on the right is half wiped out. "A" battery had been at Mourmelon only six days. We loaded up the trucks (not enough trucks to load all the ammo. We always got lots of ammo.)

We made our way to a supply run and took the trucks from the supply division. Then, we took these to the ammo dump and loaded them to the hilt.

I remember we never saw any civilians. We did notice white sheets hanging out the windows of apartments as we drove by.

We took positions at Hemroulle. Two days before the attack, I had been out all night going gun pit to gun pit checking on the men, “Keep your feet warm, lose the feet lose the man.” I remember getting to the end of the line at the fifth gun (we lost one gun coming off the mountain in a truck accident). I was out at the far end past the last guns on the north side of road.

About 3 a.m., I took a nap at a pile of rocks in the snow. When I woke up, I saw a tall man in a black leather coat to his ankles coming up the road from the “B” battery area. I think it was a German officer looking over the road. I got up behind him and followed him. Several men took aim, but I waved them down, wanting the officer to bring in their tanks so the guns could finish them. (I never really knew who this was.)

I remember seeing the 463rd Battalion CP and the church across the road used as an Aid Station on Christmas Day, but did not go in.

Side note: The aid station was hit on the 24th it re-wounded the German soldiers but not the Americans.

We did not sleep in a personal tent in Bastogne, no tents for anyone in a battery. Their CP was this farm house with a small stall for animals in the back. The men on the line tried to get into the barn when they could to warm up.

When the battle for Bastogne was over, there was a pass if you wanted it. We came out on trucks, so we could go to Paris or other towns in France. I did not want to go. I went on with my equipment at the rest camp to clean up the equipment.

End of the War

When the war ended in Europe in early May 1945, there was not much talk of going to the Pacific. The battalion could go to Berlin or you needed 82 points to go home. I had 132. I have memories of a psychologist calling me in and testing me by making a bang behind my back. I jumped up and dropped him. The psychologist put me straight away on a flight to England for a week of rest. When I got back, my men had moved on.

I was made Sergeant Major of the 502nd. From there, I went to Camp Lucky Strike where I learned of the bombs dropped on Japan.

Looking back: What or which scene grabbed me the most ...? I think about Sicily where I learned so much. There was so much death. If you kill the infantry, the tanks will stop. If the tanks stop, you can kill them too.

I met some members of the 463rd at reunions after the war, in the 1990s. My wife and I went to several reunions.