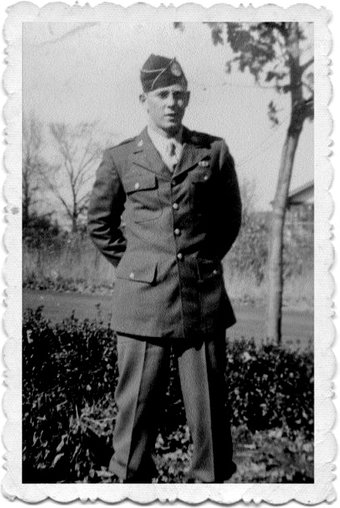 My husband, William John Whittaker was born in Sparkill, N.Y. on Sept. 12, 1923, moved to Blauvelt, N.Y. when 2 yrs of age and lived there until he married (me). This area is in Rockland County, just about 20 miles North of N.Y. City.

He attended a 4-room public grade school with 8 grades and then Haverstraw High School, graduating at age 17, June 1941.

He told me he had a "Huckleberry Finn" childhood and even though it was depression time he said it was fantastic.

His Dad bought him his first shot-gun at age 12 and taught him how to hunt (all the rules & learning to skin and clean his 'catch' -- mainly rabbits), he fished, played in the woods and played every sport there was. He held a job from the age of 12, working for his Dad in his general store, picked tomatoes on a farm, caddied at the golf club, where he got his yen for golf.

By the time he graduated from high school, (June 1941) everyone believed that we were headed for war. A few months later, September 1941, when he turned 18, he registered with the Selective Service. He did some carpentry with a friend until he was drafted and inducted on January 22, 1943.

Thanks to Mrs. Sue Whittaker !

The information below is from his records and separation papers

{He was given an I.Q. test which was high and was recommended for OTS (officers training school), he was not accepted because he did not have enough math in high school. Funny, because he ended up being an accountant, heading the dept. -- he was just a natural with numbers.}

His first leave at home, after jump school.

First time with his wings. 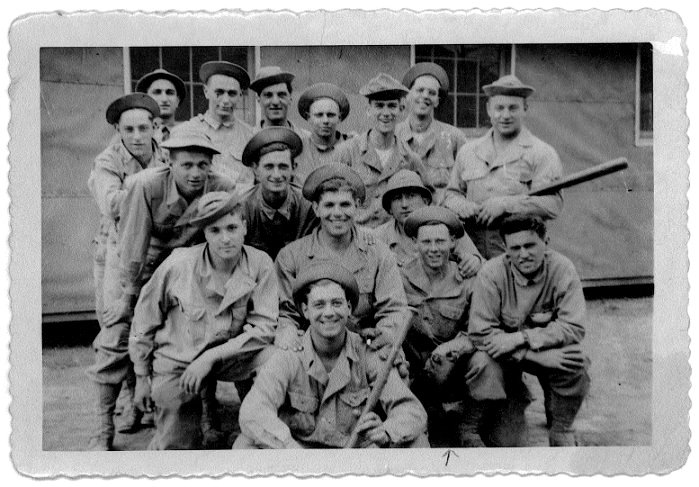 1st row has one soldier

2nd row: Bill is third from left or 2nd from right

(arrow pointing at him)

Left Reception Center, Camp Upton, 1-31-43. On Feb.1, 1943 he was sent to Camp Siebert, Alabama with the 115th Chemical Impregnation Company. {My husband told me his job was mainly dipping uniforms in carbon tetrachloride and wax, to protect the soldiers from mustard gas. He did not like it, so he went to his superior and asked for a transfer -- they said Airborne, and he said "great". He loved jumping.} 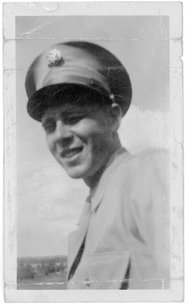 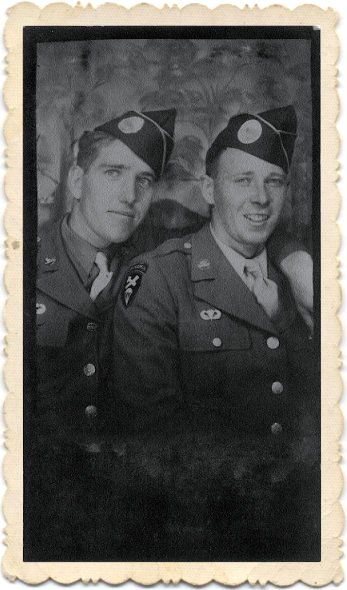 Bill on right, he told me he and this soldier were very good friends and he died, before going overseas, or when overseas,

I do not know 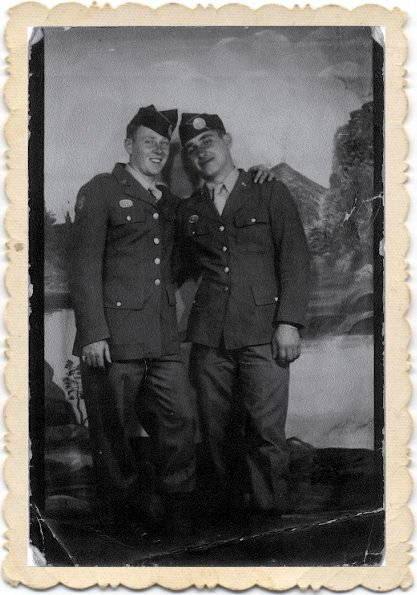 I do not know his friend's name

(Rec'd Good Conduct Medal while with the 463rd)

As stated in the newspaper clipping:

THIS WAS THE FIRST TIME IN U.S. MILITARY HISTORY THAT

A WHOLE DIVISION WAS GIVEN A PRESIDENTIAL UNIT CITATION

"for extraordinary heroism and gallantry in defense of the key communications center of Bastogne".

{While overseas he had a drivers permit and drove for a Lt. Robert C. Smith.}

Germany from April 25 to May 9, 1945 inclusive. Authorized Bronze Arrowhead.

{records missing here -- I do know he was also in Germany after peace was declared and one of his duties along with others was to go to private homes with another soldier to find out if any SS men were there. I remember him saying how scared these people were when they knocked on their doors)

He also mentioned being in Berchtesgaden (The Eagle's nest)}

Rating as a Soldier: Excellent

As per his separation Qualification Record

A few stories that he told me -- that I remember

When my husband jumped in So. France, they had been up 36 hours waiting for a moonless night. They were suppose to bury their chutes after they landed. He said that when morning came there were chutes all over the place and he and some other guys buried many of them and also helped some soldiers who got caught up in the trees. They finally found where camp was, he was so tired and hungry and as soon as he got there a Sgt. or Lt. said "Whittaker, guard that German prisoner"

Bill was so tired, hungry and so angry that he wished he could have just shot him. He guarded him and when he calmed down, he really looked at the prisoner and thought "my God, he is just a kid like me and his parents are just as worried about him as mine are about me". He then got up, got a cup of coffee from the camp fire, and handed it to the prisoner.

Bill told the story of how they were out in the field living in fox holes when they heard planes above and they knew by the sound of the motors that they were American planes. They yelled and waved at them when the planes started to machine gun them and they all jumped into their fox holes, until someone sent a flare up to tell them they were American soldiers. I do not think anyone was hurt then.

He also told the story of being in the fields, living in foxholes, not bathing for weeks when a truck pulled up and they were told that if they wanted a shower to hop in. They stood in the back of this truck driving 2 hrs. in winter and when they got there, the showers were OUTSIDE SHOWERS he said, the h--- with it, took off his clothes, took a shower and put his dirty clothes back on again and he said it felt great.

Another story he told was -- they were living on rations for a long time, when someone said they had found some oatmeal somewhere, they cooked it and it was given out to the guys and Bill said it was the first and best hot meal he'd had in a long time when a Lt. came up and said "throw it out, there's worms in it". The guys complained and said the worms were protein and were cooked.

Another time they were out in the fields, a couple of them went hunting and brought back some rabbits, skinned and cleaned them. Some scrounged around on the old farms and got carrots, etc. left in the ground and he said it was the best soup he had ever eaten.

Bill had red/sandy hair and at one time, grew a red handle-bar mustache and while he was sleeping, one of the guys cut one end of it off. ;o)

Once he got a piece of shrapnel in his shin (leg), he pulled it out, put sulfur on it and let it heal itself. Always carried that scar. These guys were tough, really tough. When they had weekend leave, the Sgt. would say "You better not be brought back by an MP, -- it had better be two MPs"

When Marlene Dietrich was in one of those parades in Mourmelon, March 1945, she was sitting on top of a jeep with "airborne boots on". Bill said some of the soldiers were yelling "Hey, Marlene! where did you get the NEW BOOTS, we need some."

One small note: In Orangeburg, NY (a town next to my husband's hometown) they built a debarkation camp called Camp Shanks. The town I lived in (5 miles away) was the largest in the County and the soldiers would come there when they had time off. They also had dances at West Point, (further up the Hudson River) for the soldiers as well as the cadets there.

It was very noticeable that many more MP's were on duty in my town of Nyack, when the Paratroopers were in. (at that time we knew who they were by their boots) I was in high school at the time and I don't ever remember there being trouble from the soldiers. They were good soldiers and were treated well by the people living in this community. As a High School student many of us volunteered at the local hospital doing the menial jobs the R.N.'s used to do, as many of them were in the Service.

I remember the fire drills and the bomb drills in school as well as being finger-printed because we lived so close to NYC and there was always fear that the City would be bombed. I remember the rationing of all foods, gas, etc. and the black-out drills. I also remember V-E day with the people singing and yelling and blowing horns in the streets. I graduated June 1945.

Mrs. Sue Whittaker : "I do know that Bill sent this original to his Mother and she kept it and gave it back to him. (as her note suggests)." The note says: "Jack you sent this poem to me while you was overseas in the war. Bob had copies made of it but I have the original you sent me. Do you remember it?"

THE HILLS OF BASTOGNE

The Crops should be full in Belgium next year.

The soil should be fertile, but the price has been dear.

The wheat should be red on the hills of Bastogne.

For the roots have been drenched with the blood of our own.

Battered and reeling we stand in their way.

Its here we are and here we will stay.

God where's the end, the end of it all ?

Confident and powerful, they strike at our lines.

But we beat them back -- fighting for time.

Berserk with fury, they are hitting us now.

Flesh against steel --We'll hold-- But how?

For each day that we stay, more Mothers must grieve,

For each hill that we hold, more men we must leave.

Yes, honor the men who will someday come home,

But pray for the men 'neath the hills of Bastogne.

This poem was written by

during the siege of Bastogne, Belgium

on Dec. 24th when the fighting was at its worst.

Bill was introduced to me by a good friend who was dating his brother, Bob. That was March 1946, just a few months after he got home. (his mother said I calmed him down ;o). I remember that he had one "flashback" when we were out one evening. We had parked at a restaurant & behind it was a railroad. A diesel was on the tracks braking and all of a sudden he jumped out of the car so fast and ducked under it. (a 1928 Plymouth). I asked him what happened and he said "I thought that was a screaming mee-mee (bomb)." So sad.

We were engaged a year later and married Nov. 16, 1947. We have two children: a daughter Mary, born 1951 and a son John, born 1953. He was a very good husband and father and very much loved. Like all the veterans, he only spoke of the good times in the Service. He got a job in NYC -- in 1955 he was transferred to Pennsylvania, as an accountant, then transferred to West Virginia in 1962. He was a pretty good golfer and enjoyed fishing.

Once our son, around age 9 asked his dad: "Dad, we won the war, didn't we" and my husband thought and said "son, no one wins a war, everyone loses". Another time John asked "Dad, did you ever shoot a man?

-- Bill said, "son, I never deliberately aimed my gun at another human being, I did shoot at the enemy."

When our son was 18, he was in the last class that had to register with Selective Service and seemed excited about it when he told us. When he left the room, my husband looked at me and said "if he ever has to go to war, I would give anything to go in his place -- I would never want him to go through what I went through"

(I guess that says it all about 'war')

Bill liked seeing documentaries on the 'war' -- I guess because it was from a different perspective. He retired October 1983 at age 60 -- found out he had metastatic renal cancer seven months later and died December 20, 1985 at age 62. 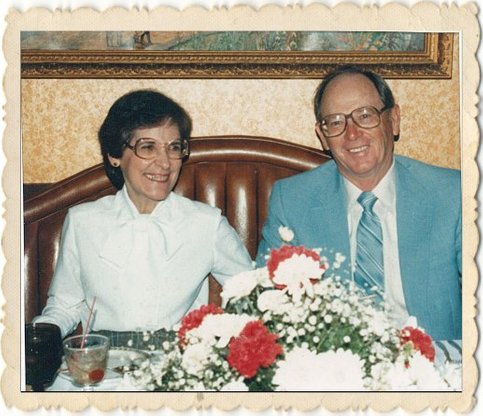 Mrs. and Mr. Whittaker at his retirement dinner.

Mrs. Whittaker : "He was the best person you could ever meet"

He lived that and though a rough and tough soldier, he was a gentle, conservative man who could be tough when he had to --still missed by wife and children.