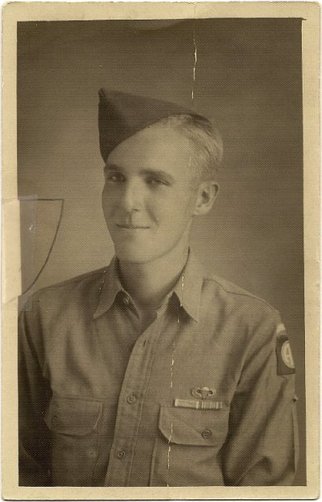 a general report as to what I did from my Army time to now.

I went to the Newark School of Fine and Industrial Art for four years.

We enjoy watching the Ocean every day, good weather or bad.

For a storm will really change a shore line.

Again thank you for your interest in part of my life. 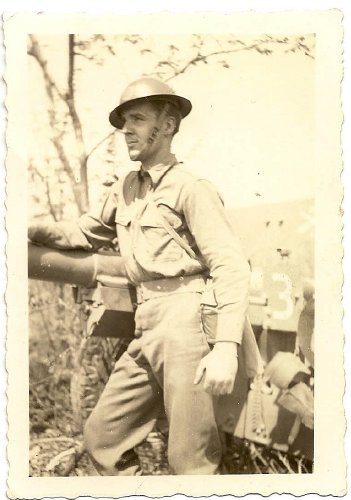 I enlisted because some of my friends were already in. This was a horse drawn outfit. They were then converted to Dodge trucks.

My mother was not living, so my father signed my enlistment papers.

I had NCO training, radio school, chemical warfare and trucking driving school. Don’t recall how the food was. When I was at Fort Dix, NJ, I was able to go home often.

Once the training was finished we didn't know where we were going.

Heading for Africa and Europe

We crossed the Atlantic in the Liberty Ship Matsen liner S.S. Monterey.

While we were at the Anzio beachhead, I heard about the split of the 456th and the 463rd.

When we jumped in Southern France, I had a good soft tree landing. We were way off our drop zone though. At Barcelonnette, the only activity that I was aware of was our fire missions on visible German positions and one pill box.

My story about the pill box, I think, is amusing. At times the Germans would come out to get sun and fresh air. When they did that, I would call for our artillery to fire on them. I’m sure they were annoyed, they would then go back inside.

The 463rd PFA arrived in Mourmelon, France, just a few days before the start of the Battle of the Bulge.

(Col. Cooper asked to join the 101st Airborne on their Rendezvous with Destiny and then the Division headed first to Werbomont, just a bit later the plans changed and the 101st went to Bastogne)

I had no idea where we were going. I just realized we were in combat again. Our trip was cold and damp.

In Bastogne I slept on the ground outside, and woke up to snow.

Lucky for me, I had just changed into winter combat suit with snow packs.

I recall, on December 17th, the 463rd moved to Bastogne, Belgium.

On the 22nd, Lt. Anderson, Pvt. Nelson, Pvt. (“Gopher“) our Jeep driver and I went by Jeep to scout out the enemy. We came upon some of our troops being held down by a German machine gun position, so Lt. Anderson said we would circle around and bring our artillery fire on the German position.

Well, we circled and tried to locate the enemy but in the deep woods they, instead, found us. We were ambushed and so ended our combat action. From then on it was all POW. 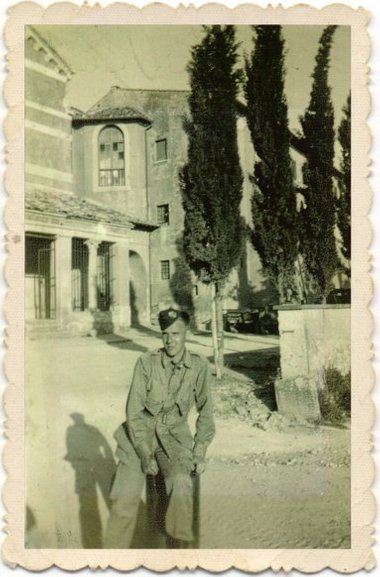 First school attended was in Evansville, PA. I felt very isolated and lonely, no one to play with. We moved around often.

The USA at War

I had just come off Post guard duty at Fort Dix, NJ when I heard on a radio about Pearl Harbor.

I felt war would happen at any time, this was it.

I was brought to a number of camps starting in Bastogne, Belgium, then Koblenz, Hammelburg, Nurnberg and lastly Moosburg, Germany. I was treated reasonably well, although there was very little food.

While on this trek we were strafed by our own P47's because they thought we were German troops. That is when Lt. Anderson was wounded in the leg.. (It looked bad). Since he was an officer he was kept separated from the enlisted men. Then shipped via train in box cars from Hammelburg (Stammlager XIIA) to Nurnberg. We then marched another 80 miles from Nurnberg to Moosburg.

At that time, we were not registered as POW's. They used us to do labor, such as moving coal cars by hand. (A cold, bad place).

We were freed April 29, 1945. Very special, but confusing. We wandered about the village of Moosburg. That night we slept in a private home on the floor. 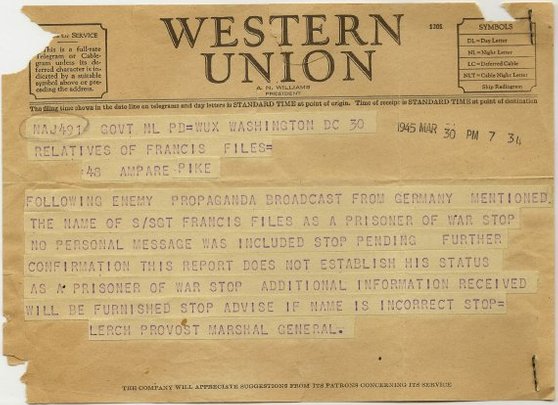 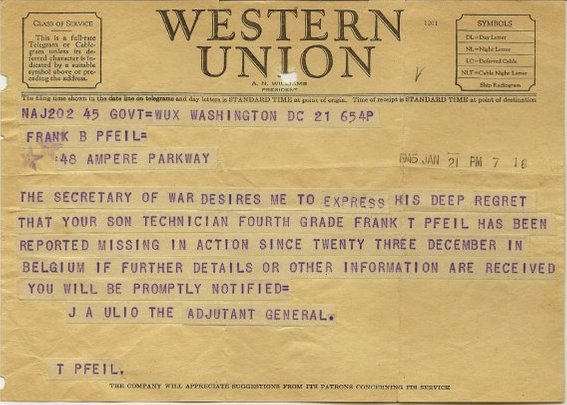 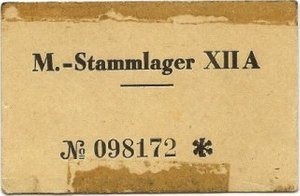 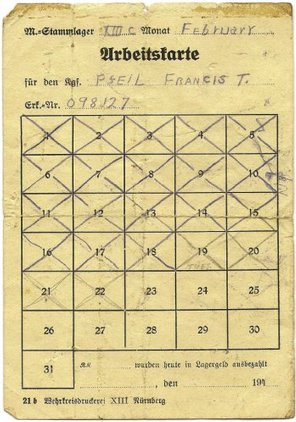 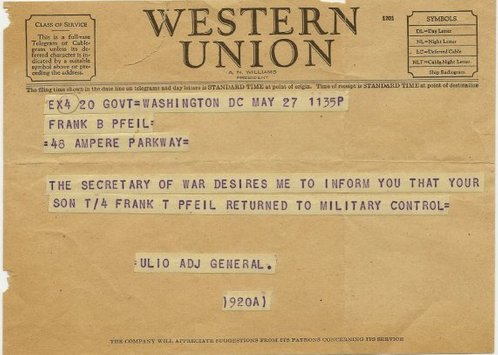 We were liberated by the 86th Division.

The German guards were sent this message: “I’ll give you 45 minutes to surrender. If you don’t, I’ll sock the hell out of you.”

They did not, he did.

Every guard was killed with exception of one elderly guard, he was good, we befriended him. 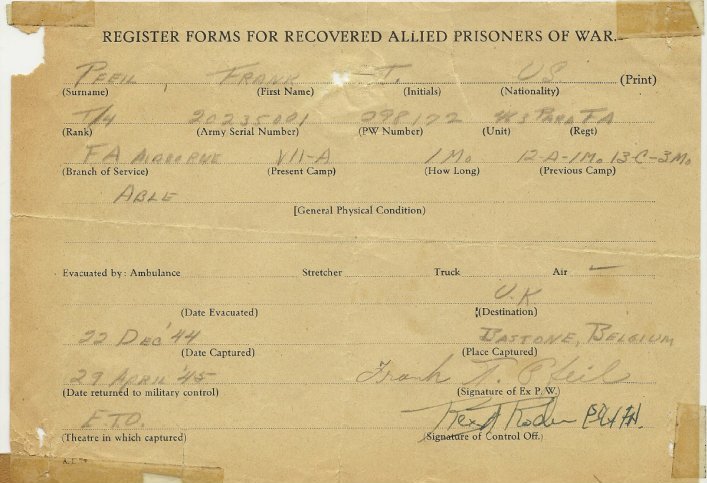 Looking back : the most compelling event for me was while on a march from Hammelburg to Moosburg. I lay on the ground by the side of the road trying to eat grass. We had no food for several days. A British soldier, from India, came to me and gave me a dried banana chip and told me not to eat grass. That was the greatest gesture that one man to another could do. I think of him often.

When the war ended

I was shipped home. I was very weak and sick when I came home, I had lost weight (145 lb. down to 86 lb.) and developed pneumonia and a lung infection. After spending four months in an Army hospital, I was given a medical discharge and was released to a Veteran’s Hospital.

I was released after two months from there.

Thinking back, if I could do it all over ... what would I change?  Nothing, it was an experience I would not change.

I met some members of the 463rd at reunions after the war, Don Fairbanks and Reed Satterstrom.

I was in contact with Carlton Lichtey (shortly after the war) and Don Fairbanks (how he found me I don't recall) before they passed away. These two men were my best friends, especially on forward O.P.

About your question "What can we teach our students about WW2 ?" my answer is :

that it was a difficult war.  I’m 89, so what I think would not impress a very young person.

I keep the memory alive by wearing my cap, which has the 101st Airborne pin on it and several of my decorations (Purple Heart).

I’m pleased when people stop and says “Thank you for your service.”

Many people, young and old do that. 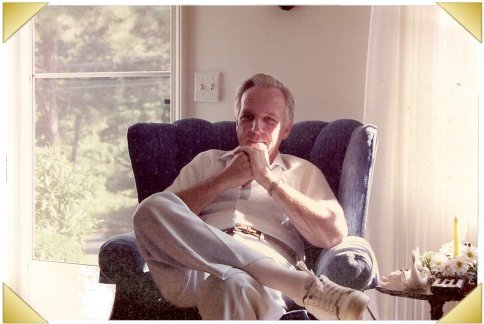 Mr. Pfeil, thank you very much for this interview !