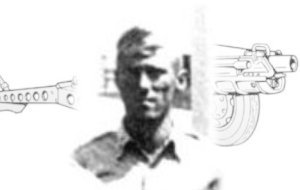 Where and when were you born? Do you have any recollections about the time you went to school or about your childhood?

What did you think when you first heard about the Japanese attack on Pearl Harbor? Did you realize immediately the USA was now involved in a global war?

I was a gunner corporal, at Fort Bragg, awaiting my call-up for O.C.S. at Fort Sill. We were going over next week's work, when we heard the Pearl Harbor attack. We all knew we had a long road ahead. This was no longer a one-year service time and with the equipment we had, we knew it would be a long haul!

When did you join the Service, and why did you join? Can you tell us about your training ?

I graduated college in Spring 1941, and three weeks later, I was down Fort Dix doing dishes. I was an early draftee and was deferred until I graduated from college. In time we're talking about six months. We had basic training at Fort Bragg in Artillery. After Pearl everything was geared up. No home time. In fact, I suspected maybe five years a G.I. or maybe more. I severed most of my back-home ties and became a soldier.

Once the training finished, did the Army tell you right away where you were going?

They sent me to Fort Sill to become a 90 day wonder. I was a shave tail officer and signed up in a Tank Destroyer outfit. By then I was ready for combat but my outfit was flunking its tests. Getting antsy, I saw a red boarded letter asking for volunteer Officers in the Paratroopers. I sent it in and 24 hours later, was on my way to Benning to become a Trooper. I had never been in a plane and in fact, as a boy, saw very few planes. I was assigned to the 456 PFA at Bragg just about the time it was activated, Fall of 42. The first time I was in a plane, I made my first qualifying jump.

Did you cross the Atlantic in a Liberty Ship, if yes, do you recall the name and where it did sail to?

Do you have any recollections about the split of the 456th ?

Headquarters Battery, A Battery and B Battery was the 463. Battery C and the rest went to England as part of the 456. The 463 then had as its full complement a little over 200 men and officers. The Battalion then added 2 howitzers to each of the 2 Batteries bringing its fire power up to a normal Parachute F.A. Bn, A normal Bn. has some 500 plus personnel. The 463rd did it with the 200 plus. The 463rd was so outstanding in its support of the First Special Service Force that it received a special Commendation from Gen. Mark Clark, the American Commander in Italy, as well as one from Gen. Frederick of the Force. I believe that the 463rd fired more rounds than all the rest of the Parachute F.A. Bn's combined. I was Battery B Exec on the breakout at Anzio, and I know we fired over six thousand rounds. After Rome fell, the Bn was brought up to full strength in preparation for the Southern France jump. 4 Gun Batteries plus Headquarters.

For this operation, some of us were about fifty miles from our DZ. In the French Alps the 463rd operated without an Infantry complement. We were our own Infantry. Again history was made, for I think this was a first in the annals of P.F.A. Bn's.

If I am not wrong the 463rd PFA arrived in Mourmelon, France, just a few days before the start of the Battle of the Bulge. Col. Cooper asked to join the 101st Airborne on their “Rendezvous with Destiny” and then Division headed first to Werbomont, just a bit later the plans changed and the 101st went to Bastogne. When did you find out that you were going into combat again? How was the trip to Bastogne? Any recollections about that?

Col Cooper had an officers' meeting and asked us to vote on going back into combat immediately or staying on guard duty. The vote, to a man, was to go back into combat. Col Cooper reported to Gen McAuliffe that the 463 would be loaded and ready to go in 45 minutes. The time was so short because the Battalion hadn't unloaded the guns and ammunition. We were combat ready. The 101st was more than happy to have us. We left at night and by daybreak we encountered many outfits on the road going in the opposite direction. Word came we were headed for the road junction at Bastogne.

Baker Battery was in the same position for the whole operation. The weather was a mixture of snow and freezing cold, with overcast conditions. No aircraft operation was possible. No air re-supply was possible. However, one had the feeling the Division would hold the perimeter. There was no thought of surrender. A true dog fall, a fight to the finish. A great experience.

When one didn't hold the line I have been told me one could have a rest in the little houses before the Rollé(y) castle. Was there some kind of schedule so that every member of the Battalion had a relief and could spend some time over there? Was this place only used by the 463rd, or did you share it with members of the 502nd PIR (the ‘chateau’ being the CP of the 502nd)? Do you have any recollections of that place?

No. I think it was a Headquarters haven. All of Baker's men were either on OP duty or manning the guns.

Once the battle for Bastogne was over, round mid January 1945, what did you do? Was that also the time some of the 463rd members got a pass for Paris? Did you also visit the ‘City of Lights’?

The Division was needed for other brush fires, The Belfort Gap, the Rohr, and the city of Cologne. However one could sense, after Bastogne it was the beginning of the end .

Did the Battalion go into combat again in Germany, if yes, all Batteries ?

When the war ended in Europe early May 1945, the USA was still at war with Japan. Was there a possibility that the 463rd would have received a new assignment in the Pacific ?

Definitely we started training for Asia after the German Surrender. Many high point Troopers volunteered for the Japan war. The Battalion was going into a training routine for the Pacific war.

Looking back : what or which scene grabbed you the most?

I've been asked many times what was our greatest trials. The Cassino Front in Italy was number one. The Apennines in Italy, Anzio, and Bastogne. Italy was the war of shortages and our cold weather clothing was inadequate. We lost many men due to both frostbite and trench foot. Most Troopers had yellow jaundice, yet most all reported for duty. They looked like a bunch of scarecrows. It's remarkable our efficiency remained at such a high level. The men were outstanding.

What did you do after the war?

Further schooling, marriage and a family, and of course work

If you could do it all over ... what would you change?

Nothing. It was a great experience.

Did you meet some members of the 463rd at reunions after the war ?

Many of us were together on the Long Trek, from Bragg to Bad Reichenhall. Many of us stayed in touch through the many years. The Bastard Battalion, the 463rd, was not part of a Division for so long, that it developed a deep feeling of togetherness. It was our home, our outfit, a cloth mother, if you will. We've always had our own yearly reunions. We all like seeing each other at our yearly reunions. As Volupsa would say. "Need you know more?"

What can we teach our students about WW2 ?

What do you think is best to keep the memory alive?

As it happened in the Ten Little Indians, it will happen to us. ' Then there were none.' The 463rd will live as long as the Roman Wall, by St. Paul's Gate, survives. The Giant Plaque, Honoring Task Force Howze, the 463rd P.F.A. Bn is the only Battalion so honored. Also, the 463rd Plaque on the church wall at Hemroulle, for its stopping the German Tank attack, that Christmas morning those many years ago. Pack Howitzers against German Tanks, superior gunnery won for the Howitzers.

Mr. Lyons, thank you very much for this interview.