Many thanks to Mr. Ted Schneider ! 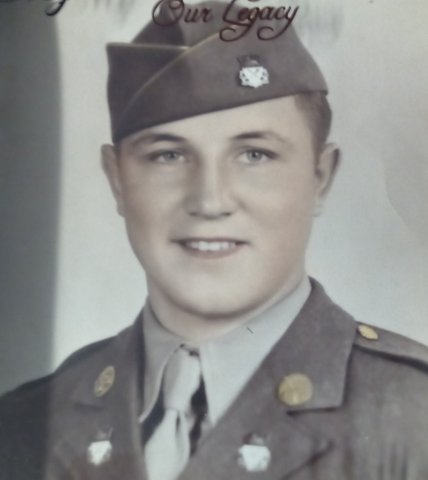 As a private assigned to one of the Battalion’s Artillery Batteries, my contributionfor the website is to describe some of the exploits a soldier makes as he moves from operation to operation, whether it be jumps or digging foxholes.

Command decisions regarding strength deployments, tactical maneuvers, are decisions made by the commands and those explanations can be found in the records or with the military historians that have researched archives of military documents. Nevertheless, I have been privileged to participate in this literary venture by contributing some military exploits that I experienced over my military career, most notably, with the 463rd.

I was born in November, 1925 in upstate New York (Watertown area) and entered the Army during World War II at 5 feet, 9 inches tall and 147 pounds. I attended “boot camp” at Ft. Riley, Kansas where I was assigned to the 15th Cavalry Regiment, reconnaissance.

I then volunteered for paratrooper training where I was sent to Louisiana and Camp Maxey, Texas. This was followed by Mojave desert maneuvers where I then was sent to Fort Benning, Georgia for more training, especially with demolition. This led to reassignment to the 13th Airborne Division where I was transferred to Camp Mackall (formerly Camp Hoffman), N.C. next to Fort Bragg. It was at this time I married my sweetheart from Sanford, N.C. and we recently celebrated our 76th anniversary.

The S.S. CRYSTOBAL took me to Sicily, Italy where I was connected to the 463rd PFAB. That summer we were in LIDO DI ROMA, Italy waiting for deployment in air operations as part of Operation Dragoon, the naval part being called Operation Anvil. (Note: a Battery B photo was taken and can be found on the 463rd Battalion website.)

Operation Dragoon commenced on August 15, 1944 as an Allied Task Force since the Operation involved an array of military units. Components of our Battalion parachuted into Southern France just north of Saint Tropez before daybreak. I jumped from a C-47 called “Ain’t Misbehavin” which later (belly-)crashed in Hemroulle, Belgium, and is among the photographs at the 463rd PFAB website depicting events during the Battle of the Bulge.

When we landed in Southern France, we were greeted by “friendly fire” from the naval forces supporting the amphibious assault. Even though I parachuted into a peach orchard, I was greeted by Gene Olivant, a Baker Battery mate enjoying a peach. He said to me as we were under friendly fire, “Have a peach, they are delicious”. I found it hard to enjoy a piece of fruit while under bombardment.
I then proceeded to a nearby farm where I absconded with a horse to expedite my travels as I gathered components of one of the air-dropped PACK 75MM Howitzers. Evidently the daisy chain that kept it together separated after the air drop scattering the components all over the drop zone. As I was successful in gather several parts, Command had received a report that I was missing and possibly killed in pursuit of this round-up. Obviously, I was able to prove this report was erroneous. 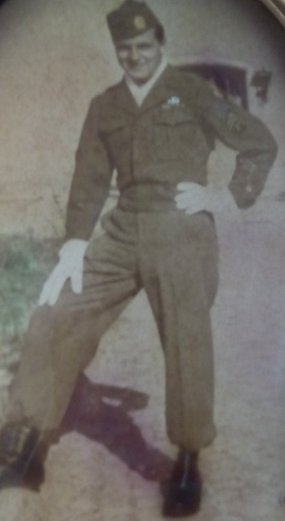 Once we secured the Southern France area designated in Operation Dragoon, we were sent to the Maritime Alps to provide artillery fire to suppress the ability of German troops to retreat out of Italy, etc. By late 1944, we were heading north through Nancy, France where we bivouacked (temporarily camped) at Mourmelon with the 101st Airborne Division. Shortly thereafter we were told and deployed to the Bastogne area as the German Offensive had begun.

We were assigned to a perimeter position northwest of Bastogne in a small village called Hemroulle. The Command Headquarters was located in the town in the military base, today called Bastogne Barracks, and “CP” is the military abbreviation designating the Command Post. The Battalion Batteries were deployed strategically along the ridges adjacent to the town to secure a perimeter. My personal responsibility was to crew the 50 caliber machine gun and prepare a machine gun pit for its location. Our crew also dug foxholes nearby so we were at the ready for immediate readiness while having shelter and safety when not on duty. At one point, some of us decided to seek the shelter of a nearby barn; however, a duty sergeant ordered us to vacate and return to our foxholes. We thought his Order was a bit peevish until a German artillery round destroyed the barn. A few days later when the Third Army arrived, we were in our foxholes when General George Patton was making rounds and appeared. I was awestruck personally, but one of my foxhole crew spoke up (I believe it was PFC Campbell) and asked the General if the handles on his revolvers were pearl. The General responded: “Pearl handles are for pimps; these handles are made of ivory.” At that point, he noticed the ground was littered with 50 caliber empty brass shell casings and ordered us to clean up the grounds.

As the Battle of the Bulge wound down, we were relieved and travelled with the 101st Airborne division through Belgium and into southern Germany through the spring and until the end of the war which was in early May, 1945. At that time, I was 1 point shy of the required number to get to come home, so I remained deployed until November, 1945. I can recall 2 incidents while serving as an occupational force. The first was when I had the comforts of a home including bedding. I recall the homeowner crying as we were cleaning our weapons on her expensive living room carpet. Later on that year, we were in Bad Reichenhall, a town in Southeastern Germany in Bavaria and to the German-Austrian border. It was here, at the Hotel Kaiser, where I received my Orders to go to Berlin and eventually home. At this time, either I or our Battalion was assigned to the 82nd “All-American” Airborne Division

So, it was off to Berlin, then to Le Havre France which is coastal town on the English Channel. From there I boarded the S.S. Wilmington and it was back to the States where I wound up at Fort Dix, New Jersey. I was then transported to Fort Bragg, N.C. where I was mustered out of the Army.

After my discharge, I entered civilian life and took a job as lineman for the phone company in North Carolina as well as starting a family. By 1948, I decided to re-enlist with the 82nd Airborne home based at Fort Bragg. Later, I entered Nike Missile Surface Defense School in Buffalo, New York. By 1962, I received Orders to report to Bitburg, Germany, where a Nike Defense System protected the NATO Air Base. Bitburg is about 20 miles north of Trier, Germany. I located my family in a military town outside Trier until it was time to retire and come home late in 1963, early 1964. I had achieved the rank of Master Sergeant (E-8) when I retired.

As a footnote to my military career, I had an opportunity to visit Hemroulle when I was assigned to Bitburg. It was now about 18 years since the Battle of the Bulge. The nostalgic trip was so vivid to me as I walked along the ridge where our foxholes and gun pit were located. Even though I went in the fall and the grounds were strewn with leaves rather than snow, I walked to the exact spot where I was 18 years ago with much of it like it was in December, 1944.

As I reminisce of that time in history, I think of the Bomber Groups and Fighter Squadrons that took to the air, the Armies and Battalions that occupied the land, and the Naval Task Forces and Flotillas that roamed the seas, both American and Allied, to rid the scourge that menaced the world. Thank you once again for this opportunity to be part of such a noble endeavor. 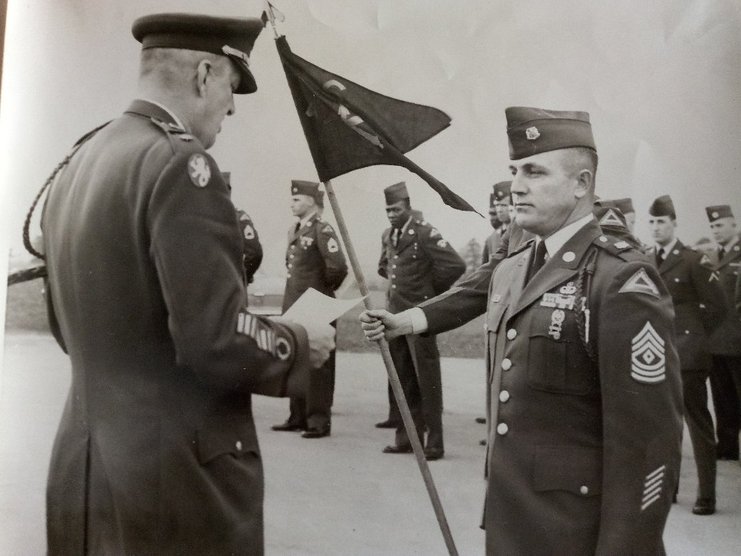 Mr. Cornaire just before he was deployed to Bitburg at Buffalo, New York in 1962.

Here is the entry on the back of the photo:

His birth certificate has his D.O.B. as November 06, 1925.  He was born in upper New York (Watertown) although his biological parents were married in Rochester, N.Y. another upper New York town just east of Watertown.

He married Edna Williams, April 20, 1944 in Bennettsville, South Carolina, resided in Sanford, North Carolina where Edna had family and this is a town northwest of Fayetteville, N.C., the town where Ft. Bragg, home of the 82nd  is located.

He spent 22 years in the Army.