The Campaign in Germany (the Ruhr and Southern Germany)

From the monthly Narratives

On 3 April 1945 the 463rd Parachute Field Artillery Battalion was located at Camp Mourmelon, France where it had been in bivouac re-equipping and training since 1 March 1945. At 0200 hour on 3 April l945 this battalion departed this bivouac area en route to Neuss, Germany to execute an assigned tactical mission. Arriving in the vicinity of Neusserweyhe, Germany (248-913) at 1600 hour and being assigned the mission of direct support artillery for the 327th Glider Infantry Regiment, this battalion established its Command Post in this town and the Howitzer batteries closed into firing position as indicated on overlay "A".

This battalion remained in the positions as indicated on overlay "A", delivering the normal supporting fires for the 327th Glider Infantry Regiment. With a view of possible displacement a reconnaissance was held and survey for alternate positions completed on 7 April 1945. However, this did not materialize and displacement was not made. This battalion on 9 April 1945 fired in support of a raid of company strength executed by the 327th Glider Infantry Regiment by delivering prearranged defensive fires to cover the withdrawal of the raiding company to the west side of the Rhine river.

In addition to the normal supporting fire, this battalion on 12 to 13 April 1945 prepared experimented tests with the recoilless rifle, 75mm, T-21. On 12 April 1945 the weapon was emplaced so as to deliver direct fire into enemy territory and 14 rounds HE-AT and 14 rounds HE-48 were expended with excellent results. On 13 April 1945 a battery of four (4) of these weapons was placed in position and indirect fire conducted under fire directions control. Transfers were made and results were excellent.

This battalion remained in the same location and continued its fire in support of the 327th Glider Infantry Regiment until officially relieved at 1600 hour 17 April 1945.

Operating in a non-tactical capacity until 23 April 1945 the battalion then on 23-24 April 1945 executed a rail-truck movement en route to Shillingstadt, Germany, the last units closing in at 26 April 1945. From this date until the completion of the month this organization remained in this same location, not in direct contact with the enemy.

During the period 3 April 1945 to 17 April 1945, inclusive, this battalion expended a total of 4,943 rounds of ammunition on targets as follows, using ground and air OP's.

In addition to the targets fired as indicated above, this battalion fired one (1) preparation mission, and twelve (12) harassing missions.

During the month of April two things became very apparent. First the lack of organic transportation again hindered the movement of the battalion in its tactical moves. It is becoming more and more apparent that the solution to the transportation problem of an Airborne Battalion is the equipping of the battalion as a regular motorized 155mm Howitzer Battalion with such special Airborne equipment as might become necessary. After a Parachute mission organic equipment to be brought in on D + 5 or more days. Second the Recoilless 75 proved a very effective gun when fired both as direct and indirect fire. The primary objection being the tremendous flash which would tend to disclose the battery position for night firing. This gun would necessitate wide battery fronts as the rear blast is so terrific that it would not be advisable to having one gun firing from in front of another, therefore the normal staggered positions that we now use would give way to straight line battery front or very wide staggered positions.

I am of the opinion that the Recoilless 75 may be used as an auxiliary weapon for a regular 105 Truck drawn battalion and used for anti-tank protection while operating with 105 equipment. In case of a Parachute mission, the 75mm Recoilless weapon could be used as regular 75mm artillery.

Though at this time this organization was not in direct contact with the enemy it did, on this date, executed a tactical move closing into bivouac at Schwabsoien, Germany (Map, Germany, 1/100,000, sheet X-5, Weilheim, 6315-1198) at about 2300 hour.

Remaining in this location overnight, this battalion received further movement orders to execute a tactical move forward and at 1500 hour on 2 May 1945 departed Schwabsoien enroute to Starnberg, Germany (Map, Germany, 1/100,000, sheet X-6) Munchen, 8690-1400), arriving at this destination at about 1900 hour. On this date the borrowed transportation was returned and the battalion remained in this location until 4 May 1945, when at 0630 hour movement by shuttle was commended. Moving to the assigned area the last portions of the battalion closed into the new area at about 2000 hour.

The battalion remained in its same location, established security and patrols, and on 6 May 1945 was assigned the mission of Police and Military Government of the area as indicated on overlay "A".
This battalion carried out this mission from this same location until the close of the period on 10 May 1945.

During the period indicated there have been no real security problems. This battalion has set up a city police force in the city of Bad Reichenhall for the purpose of enforcing law and order. This police force is composed of two (2) officers and twenty-one (21) enlisted men. One patrol, composed of three men with a jeep, patrols the city twenty-four hours a day. Another patrol with the same composition operates between the hours of 0800 and 0100. Between the hours of 1700 and 2130 all enlisted personnel of the force are on the streets of the city to check military personnel for uniform, discipline, and military courtesy, and to check civilian personnel for violation of curfew. Sixteen (16) enlisted men were apprehended for various reasons, nine (9) were for violation of uniform regulations, four (4) for entering German houses without an officer being present, three (3) were for being drunk in uniform. Fifty-two (52) civilians were apprehended for various reasons: nineteen (19) Poles, eight (8) Russians, six (6) Italians, five (5) French and two (2) Austrians and eleven (11) Germans were arrested for violation of curfew. One German we arrested for stealing rations. Over one hundred (100) persons suspected of being prominent Nazis, Werewolves, German military personnel in civilian clothes but not yet discharged, etc., were investigated by the city police, and same thirty were found to be guilty. This police force has worked in close cooperation with the Military Government and the CIC of the Bad Reichenhall area.

Two hours each week has been spent on orientation on current topics. Situation maps were distributed to each battery and kept up to date by following the daily newspapers and the radio. The film "Two Down and One to Go" was shown to the entire battalion and later organized groups discussed the film and such topics as readjustment and redeployment. On 21 May 1945 the Assistant S-3 went to I and E school in Paris, for six (6) days.
A survey of the battalion was made to determine the courses desired for unit school. Also all men qualified as instructors for unit schools were interviewed. An athletic program in softball, baseball, football, and volley ball, was inaugurated with special emphasis on inter battery competition. A battalion track team was organized and trained for inter battalion and higher competition. The combat training of the battalion was continued with a view to maintain in present efficiency. The morale of the battalion was excellent.

Non-fraternization with the Germans has not been too hard to adhere to apparently from all indications. The various batteries of this battalion have had parties for the men. Foreign women who could prove by their identification papers that they were DP's were registered with the battalion, issued DP arm bands and invited to the parties. This kept the men from getting the urge to disregard the non-fraternization ruling. This has been the first time that the men have been allowed to fraternize with women since the battalion entered Germany. The venereal disease rates have gone up to some extent but that was to be expected, especially since the battalion is no longer In combat.

On about 15 May 1945 a survey was made of Bad Reichenhall and Bayerisch-Gmain in an effort to determine how many displaced persons were located in those two towns. This survey was not accurate since many DP's were on the move and could not be stopped except by extreme measures. The survey showed approximately four hundred (400) DP's in this area. On 18 May 1945 one hundred and sixty-nine (169) DP's were sent to Berchtesgaden Germany to a temporary DP camp. This number was composed of the following: French-one hundred and twenty-eight (128), Dutch-twenty-one (21), Belgian-ten (10), and Spanish-ten (10). On 20 May 1945 forty-nine (49) DP's were sent to a DP camp at Rosenheim Germany. This number was composed of the following; French-thirty-three (33), Dutch-four (4), Belgian-ten (10), and Luxemburg two (2). On 22 May 1945 another survey was made of the Bad Reichenhall-Bayerisch Gmain area and six hundred and fifty-eight DP's from Eastern countries were located. This number included three hundred and twenty-eight (328) Russians, one hundred and eighteen (118) Poles, eleven (11) Czechs, and one hundred and one (101) Italians. On 29 May 1945 one hundred ad forty-two (142) Italians were seat to the DP camp at Fischhorn, Austria. Although every attempt has been made to try to keep the displaced persons from traveling around the country on their own there are some that will not comply with our wishes. No attempt has been made to use force on these persons but it makes impossible the task of obtaining complete data on the number of DP's in any one area at any specified time. The housing situation in this area is quite bad due to the large number of American troops, DP's, German evacuees, and German military hospitals located here.

No discoveries of important treasures, documents, or war criminals have been made in this area.

One (1) German general, General Tolsdorff, was located in the villa Monschea on Epp Strasse on 13 May 1945. He was under medical care at the time so the Villa was placed under guard by the City Police. On 29 May 1945 the general was moved to Munich, Germany. The City Police had several drives during this period in an effort to clear the city of all German military personnel who had not been properly discharged. Those drives netted about one hundred (100) persons who were placed in the PW stockade of the 907th Glider Field Artillery Battalion which was located at (84.3-16.5). The city police also apprehended fifty-five members of the SS, various ranks were included. German PW's were used by the battalion upon its arrival in the Bad Reichenhall area to help clean the billets and billeting area and also otherwise help the battalion get set up in the area. 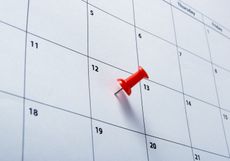 Battle from April 3 to April 17

Batteries A, C, & D in Bayerisch-Gmain.

Battery B in Bad Reichenhall in Duchess Kaiser Motel 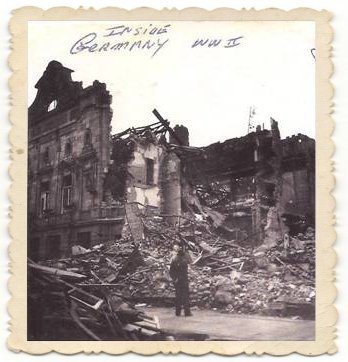 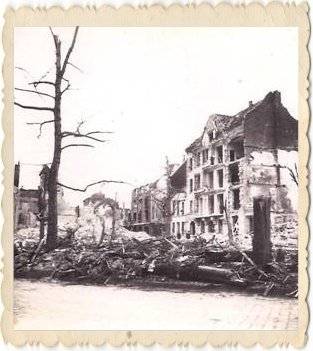 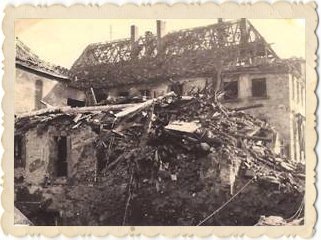 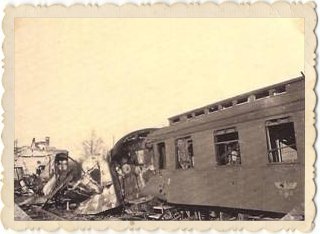 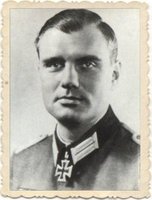 "B" Battery in Bad Reichenhall
(probably in front of the Deutscher Kaiser Hotel).

Bill Tingen: "On the right rear could be Bushea (guess the way u spell his name).
Could be me 3rd or 4th on left standing, not sure.

Might be Quintanilla next to Hazzard. These are my guesses, not positive..." 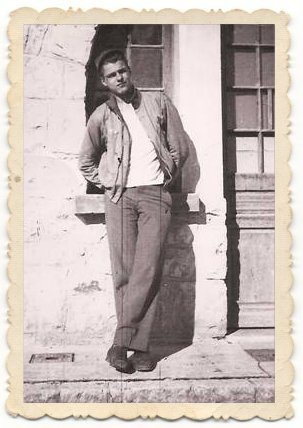 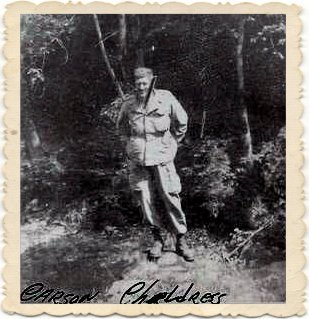 Booger "gave" a German tank to his Battalion commander
On Christmas 1944 in Bastogne
as a Christmas present. 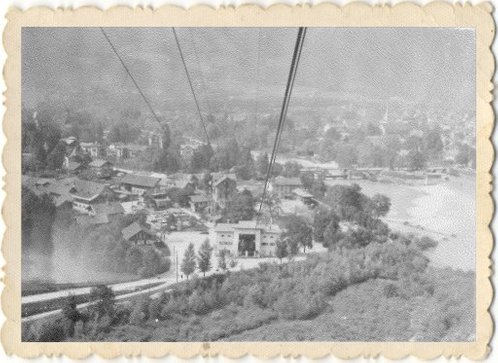 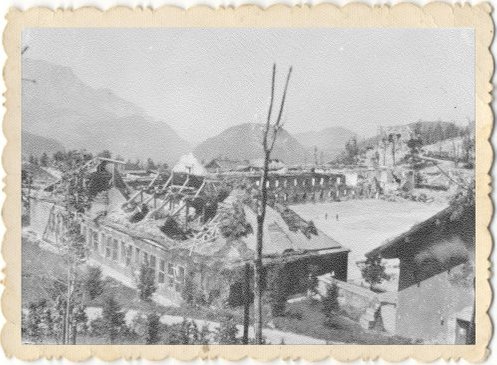 Most likely pictures from Bad Reichenhall 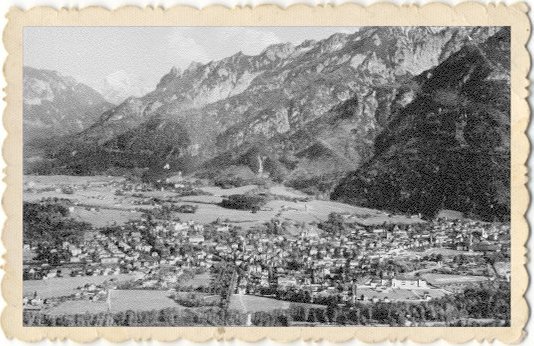 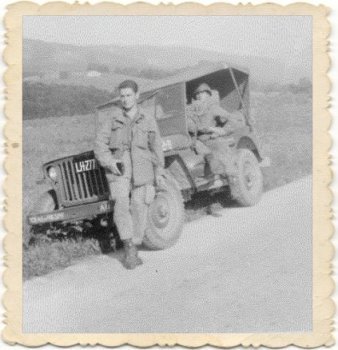